This past weekend, Beyoncè released her album Lemonade. Now, I am a fan but I am not a member of the beyhive. Reasons being I really do not like to pit artists against each other. Too many artists speak to my inner dragon self to love someone more than someone else. It seems every time she does something, the world turns into either I overly love her to I hate the ground she walks on. Beyoncè has become one of the most polarizing artists of the late 90’s into the new millennium.

This album speaks to me on many different levels and each song speaks to what happens to women, especially black women. We are always are seen that we are strong or too independent. We have to hold our men down even though they may not have a ounce of respect for us. We have tolerate them having side chicks just to say we are his main. I am still wondering when we made this behavior so damn acceptable.

Beyoncè released an hour long film basically talking about what it is like when we suffer through love. The intuition, the doubt, anger, apathy, emptiness, father issues, forgiveness, freedom and doing right by ourselves as black women. Of course, once the album was released, the world began scouring through to see how many people helped her write it. People writing think pieces about the words she sang and how she has become too radical. I am still trying to figure out when the world forgot Beyoncè was black. Her discography spoke every so silently the issues she has spread loud and clear now. Bills bills bills, say my name, Diva, jealous, get on the bus are just a few. People got blinded by the beats and didn’t really see that she has been telling this story for awhile. The problem most seem to have is that Beyoncè was seen as safe. She wouldn’t rock the boat and go with the float. But as a young artist, you do not usually have the flexibility to say what you want for fear of the media ridiculing your every word.  Beyoncè learned early that her music is the way she can tell her story and her message. Her power to get to people is through her music. We all know she isn’t def to the bullshit the world has spewed on her and her family.  I guess it is a shock because she is cursing and being in your face about how she feels.  You know how people will bottle things away till the last nerve is hit and the dam breaks. This is what Lemonade represents.  The dam has broken and because of the power she wields, she knows she can sing this message and know the world will scrutinize and get the world talking. She uses the influence she has to help with national and international causes. Beyoncè  doesn’t need the pat on the back because it seems she was raised to think of the her people. I do not think she ever forgot she was black. The world like to think black people forget that sometimes but we don’t. We are not that ignorant.

People are scouring and over analyzing every word she has uttered on this new album. “Becky with the good hair ” has sparks controversy about that being a slur to white women. So many other cultures have to deal with certain names being the butt of jokes but as soon as it is assumed that she is talking about white girls, everybody got a problem. This is not the Kanye West/Taylor Swift debacle  where the country rallied around the “poor little white girl who was upstaged by the angry black man.” For years people of color especially black people have had to deal with the slings and arrows of jokes just so “massa” doesn’t get upset. Shucking and jiving just so some people can feel comfortable. Well I am not sorry that the comfort that has been going on  for centuries is slowly coming apart for you. People of color have had to deal with being uncomfortable since birth. 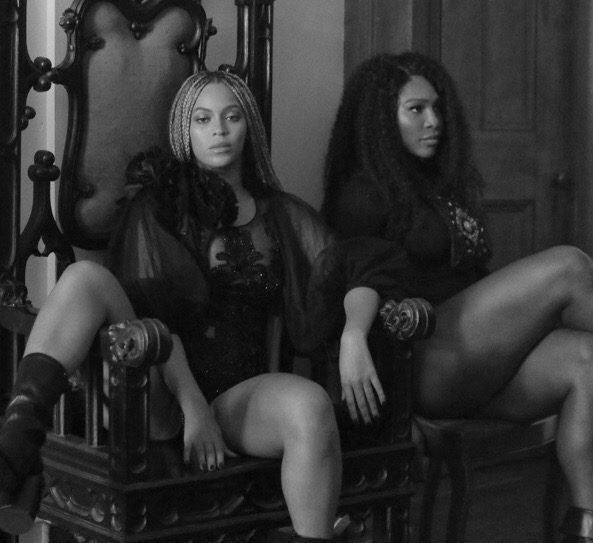 It is amazing how much Beyoncè can be perceived a feminist until she wants to highlight black women’s issues.  How does her trying to uplift her own women detract from other ethnicities uplifting theirs? It never cease to amaze that when anyone starts feeling good about their culture , the automatic default is that you are anti white. I know that maybe how some of you were raised feeling that somehow you are the master race  but those thoughts are as old and ancient as the mentality behind them. Yes music is universal but too many genres would not be here if slave music did not grow and mature into rock and roll, country , blues, jazz and hip hop. I am not sorry that Beyoncè who has basically paid her bones in this music industry now wants to use her voice for what is close to her heart. I am not sorry if people feel she is overrated. She is no more or no less over rated than most pop stars of the last 40 years. Most of the time the hate stems from these fans that turn into rabid dogs if something bad is said about their idol. Get over it and move on. The other issue is when other artists weigh their two cents in whether for actual purpose or just to market themselves and get themselves trending on Twitter for 24 hours. We get it. Everyone wants a participation award for showing up to the party.  Woo hoo , you want a cookie? People putting in their words because they got a history of hating the artist or because of the foolishness of the fandom, feel the need to fan the flames. Unless you are specifically called for meaning you have an embossed invitation, I suggest you stay quiet and keep the opinion to yourself.

In the words of Hattie White :

“I’ve had my ups and downs, but I’ve always find the inner strength to pull myself up. I was served lemons but I made lemonade. ”
Serve Beyoncè. Serve.